That Month in Tuscany (Take Me There) 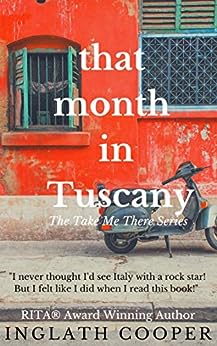 Ren Sawyer and Lizzy Harper live completely different lives. He’s a rock star with a secret he can no longer live with. She’s a regular person whose husband stood her up for a long planned anniversary trip.

On a flight across the Atlantic headed for Italy, a drunken pity party and untimely turbulence literally drop Lizzy into Ren’s lap. It is the last thing she can imagine ever happening to someone like her. But despite their surface differences, they discover an undeniable pull between them. A pull that leads them both to remember who they had once been before letting themselves be changed by a life they had each chosen.

Exploring the streets of Florence and the hills of Tuscany together – two people with seemingly nothing in common – changes them both forever. And what they find in each other is something that might just heal them both.

That Month in Tuscany (Take Me There)