13 things to know (and love) about Laura Brown


You might have heard our news. In just a few weeks’ time, we’ll be hosting the phenomenal Laura Brown at events in Sydney and Melbourne.

We knew three minutes after we announced this event that Laura had a lot of fans, but if you’ve never heard of Laura or you’re thinking, ‘should I come to that event?’ here are some fun facts about Laura that might help make up your mind.

1. She wanted to be a magazine editor since the age of nine.

“I read the three-month-old, imported copies of Vogue and Harper’s Bazaar from the newsagent,” she once told the Sydney Morning Herald.

Brown studied journalism at Bathurst University, before getting her start at the now defunct title Mode. She lived in London for a few years, before returning to Sydney to be the features editor of Harper’s Bazaar in Australia, but that didn’t last long. She had her sights set on New York City …

2. She moved to New York more than 20 years ago, at an interesting (and sad) time.

Laura moved to New York with $5,000 in her bank account and no real contacts. It was just seven days before September 11, 2001. Despite many Aussies fleeing back home, Laura decided to stay in New York and has been there ever since.

3. She has a very impressive resume

After 25 years in the magazine business, with the likes of Harper’s Bazaar and W Magazine on her resume, Laura’s most recent accolade as the global editor-in-chief of InStyle magazine saw her flip the magazine, broadening the definition of “style” to include people doing good, bringing joy and breaking barriers.

During her time at the magazine, she put everyone from Jennifer Husdon, Selma Hayak, Jennifer Lopez and Melissa McCarthy on the cover. During the pandemic, she featured Chief Medical Advisor to the President of the United States, Dr Anthony Fauci.

Laura spent the first years of her childhood in Camden before her parents divorced when she was five. Laura and her mum, Lola, first moved to Manly until her and her mum settled in North Sydney.

On social media, she once told The Cut: “I’ve always had a decent amount of ease with it. I really love being able to capture little funny moments. I’m not thinking, ‘Oh, I have to post today,’ and I’m not agonizing about captioning. I just bloody do it.”

6. Including some well-known friends

“If I hadn’t made a couple of friends after working with celebrities for so long, that wouldn’t say much for my social skills,” she told the SMH.

7. Her favourite outfit may surprise you

“I’m a jeans and T-shirt-y top kind of girl,” she told Fashionista. “I feel my best in them, I feel more in command of myself, and I feel more attractive.”

8. She was arguably the most powerful Australian in fashion media for many years, but many Australians only learned about Laura thanks to a 60 minutes interview in 2017.

Check it out here!

9. When other magazines were reducing print editions and going online, Laura did not. She continued to publish the print issue of InStyle right through the pandemic …

Laura once snuck into fashion shows at Paris Fashion Week without credentials and took photos on a disposable camera, “I was sitting so far back I was just seeing torsos!”

11. She met her husband Brandon at a hotel in LA – he was a waiter, and she was a VIP guest

In an essay called “My girlfriend is WAY more successful than I am – and 16 years older,” Brandon wrote: “One notably flirtatious morning my computer fatefully malfunctioned. I handwrote her bill and included at the bottom a cheeky prompt for her phone number (first and only time I pulled this, hand on heart — for you statisticians out there, that’s a 1.000 batting average).”

12. She’s the creative mastermind behind those celebrity elevator videos

We’ve all seen those star-studded videos of celebs from Martha Stewart and Snoop Dog to the cast of Stranger Things dressed to the nines and having a good ol’ time.

Love the concept? That was all Laura’s idea! 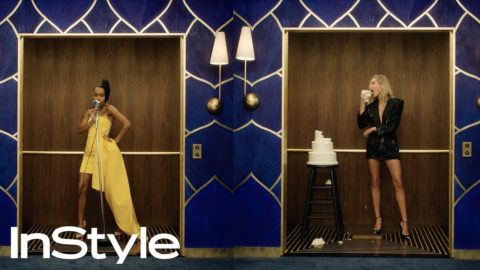 13. During the devastating bushfires of 2020, a picture of Laura hugging a kangaroo went viral

It was largely misreported that Laura was a volunteer who had rescued the kangaroo. Laura went to Instagram to set the truth and used the opportunity to ask people to donate money to organisations that were helping rescue wildlife during the fires. She’s good like that.

We can’t wait to welcome Laura to Business Chicks and hope you’ll be there too. Not only will Laura be sharing her wisdom and her stories, we’ll also be hosting networking drinks, so you have your chance to meet some of the Business Chicks community too!

You don’t want to miss this!

If you haven’t got your tickets yet, here’s the link you’ll need.

Leigh Sales AM in Melbourne

Leigh Sales AM in Brisbane